If you want to protect a house, sprinkling ruqyah water in every corner, possibly also mixing in some salt, and saying bismilLah (in the name of God) is very good! But if you can’t do that consistently, saying Bismillah while even just imagining the corners and making the intention to protect the house is enough.
(Washing with ruqyah water also works for removing 'ayn from a house, bi-idhnilLah/by God's permission).

‎The prophet Muhammad (salla Allahu 'alaihi wa sallam/peace and blessings of God be upon him) also used "اخرج عدو الله" (leave, enemy of God) to chase them out.

Sexually predatory jinn are also common (they can be sent due to magic or of their own will if one neglects to say the du'a for entering bathrooms (Allahuma inni a'udhu bikka minal-khubthi wal-khabayyith اللهم إني أعوذ بك من الخبث و الخبائث, doesn't say bismilLah or بسم الله الذي لا اله إلا هو بسم الله الرحمن الرحيم (bismilLahi al-ladhi la illaha illa huwa bismilLahi Ar-Rahman Ar-Raheem while removing clothes, or stands naked in front of mirrors, sleeps naked, or sleeps in a state of impurity... there are a lot of ways to deal with these, but among the most important aside from sleeping in a state of wudhu, praying at least two rak'ah as night vigil prayers after the obligatory ones are finished, and of course the regular tahseen before sleep is this collection of verses! First, say Allahuma ij'alni fi hisnika-al-aman: 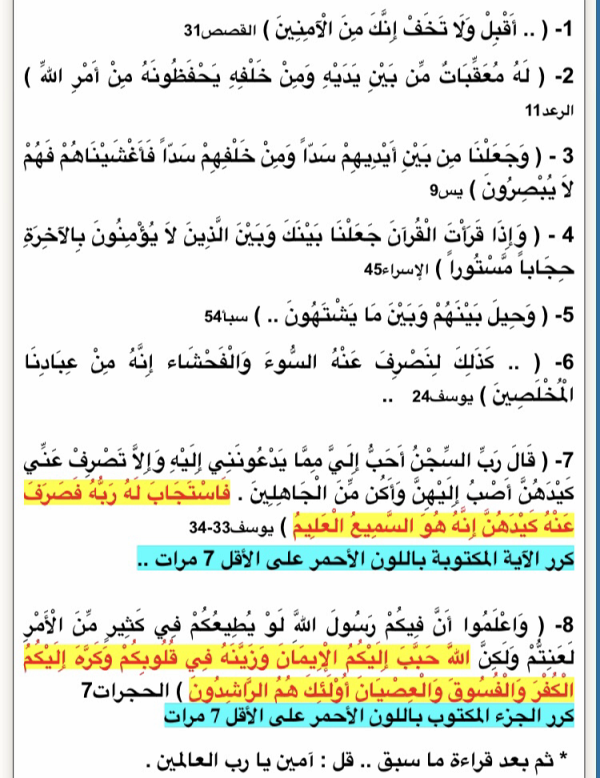 Read them, blowing into your hands after every ayah (aside from the last two, the last part of which is repeated seven times), then run them over your body and you should be done! Ignore whatever you might see to discourage/frighten/sadden you or their attempts to renew magic (if that is what brought them to you, just silently pray that God destroys all their attempts and prevents them from succeeding), just carry on, know you're braver and stronger than them as long as you rely on the Creator of the world and, after that, possess good and clean intentions and and you'll see an immediate difference!
I am planning on providing translation (of tafseer/interpretation of meaning) in English of the verses on that webpage soon.

For a definitive breaking of sihr, after making the right intention and asking God to break every magic/sihr, 'ayn/evil eye, and remove envy/hasad from you, your family, your home, and belongings, read Surat AlBaqarah, it is undeniably strongest and most effective. It can be read all in one go, or broken up over three days, as long as you finish before the time of Asr on the third day (otherwise, you exceeded the three days it can work and have to start over) .

I also think it helps a lot to recite on your water (we use gallons in our home!), followed with a أعوذ بالله السميع العليم من الشيطان الرجيم من همزه و نفخه و نفثه (A'udhu bikallimatil-Illahi As-Samee'ul Al-'Aleem min ash-shaytan ar-rajeem wa min hamzihi wa nafkhihi wa nafthih) "I seek refuge in God’s words, the All-Hearing, All-Knowing from Satan the accursed, and from his whispers, his blowing, and his expectoration) so they don’t mess with it.

There are also many specialzied ruqya vudeos, I linked a few very good ones in the resources links, I recommend listening and repeating with the raaqi what you can (listening while working/studying is also okay, but be aware you might fall asleep, so if possible, so avoid doing so while driving or something potentially dangerous like that). Ruqya videos that are Quran only are fine to fall asleep listening to, but du'a only ones can elad to jinn retaliating or frightening dreams or rneewed magic.

(Note: if spiritual illness is the case, much like any other illness, you will often feel worse before you get better, don’t be scared off by it!)

(You’ll notice a change in taste if you have any spiritual issues! It might taste "hot"/"burning" or stinging or you’ll feel like there’s rope or string in your throat, or it could just taste sweeter instead, etc. Best to use clean, not used yet water, but as long as it’s safe to drink, it should be okay. ^^ It’s important to say bismilLah, before every sip for maximum benefit with this, but it’s all helpful in sha Allah.

(وَلَا تَهِنُوا وَلَا تَحْزَنُوا وَأَنتُمُ الْأَعْلَوْنَ إِن كُنتُم مُّؤْمِنِينَ)
Particularly in distressful times, remember that everything is in God’s hand, just as it always is. Even when the world seems more hostile and dangerous, you can still hold fast to the rope of faith. No matter the situation, nothing befalls us except by the permission of God and du’a (supplication) can change the divine decree. We are just as dependent on God's mercy in the safety of our homes as we are in dangerous situations, so never abandon relying on Him and supplicating.
“No precaution can protect against the decree of Allah. Dua is beneficial with regard to what has been decreed and what has not been decreed. The dua meets the calamity that has been decreed and wrestles with it, until the Day of Resurrection.” [Tabarani]
As the Prophet said, everything that befalls a Muslim, of good or evil, will ultimately serve them depending on how they respond to it.
Prophet, upon whom be peace, said:
“There is no Muslim on the face of the earth that asks Allah for anything except that Allah gives it to him, or averts from him a similar evil, as long as he does not ask for something evil or for breaking the ties of kinship.” [At-Tirmidhi]

For healing and a sense of peace when your chest feels constrained, make the intention for healing (ask God for it to be a cause of healing), place your right hand on your heart while saying bismilLah, and recite Ayat AlKursi. Surat Al-Fatiha 7 times also can work, as it's recommended by the Prophet to heal many different pains.
I used to have frequent panic attacks when I was younger, this would stop the majority of them, then, I stopped ever getting them.

If you have a particular fear, such as social anxiety or a fear of public speaking, or become anxious during exams or some other specific situation, a good supplication to make before beginning the task is that of Musa (Moses) in the Quran, when he asked of God, before meeting Fir'awn (Pharaoh): "Rabbi ishrah li sadree, wa yassir lee amree, wa uhlul 'uqdattun min lisanee, yafqahu qawli" (My God, make my chest expansive [i.e. the opposite of constrained/tight], make my affairs easy, and loosen the knot from my tongue, so that they may understand me.)

Listening to the verses of tranquility (this version has English translation of interpretation of meaning too, to help you understand some of the meanings these verses can convey) also helps, especially if prone to nightmares, have them on loop, using an app like GoMusic or download them via iiyoutube.com (for downloading video) or youtubepp.com (for downloading MP3/sound files) so you can play them offline too.

If you can take advantage of any worldly means of treating depression, like speaking with a counseller, seeing a therapist, sleep early (healthy sleep stabilizes mood disorders), eat well (have at least two different fruits or fresh vegetables a day, take supplements as needed, etc.), journalling, practicing self-care (both the comforting sort and the sort that helps you get at least a little done each day so you don't get caught in a spiral of guilt), please do!

As Muslims, we take advantage of both the worldly means of treating problems, as well as sincerely believing true healing is in God's hands and that He placed these means in the world to help us, so use what you can.

The Prophet Muhammad (peace be upon him) taught us that our bodies have rights over us, so make your intention to care for your body and your mind, and it should count as a good deed! ♥ It is a trust from God, so please take care of this body of yours, there is no crewture on this Earth that exists meaninglessly... God in His infinite wisdom placed you here, so have patience and be gentle with yourself, as long as you live, you can improve and find more reasons to live too.

The du'a for sorrow is this: 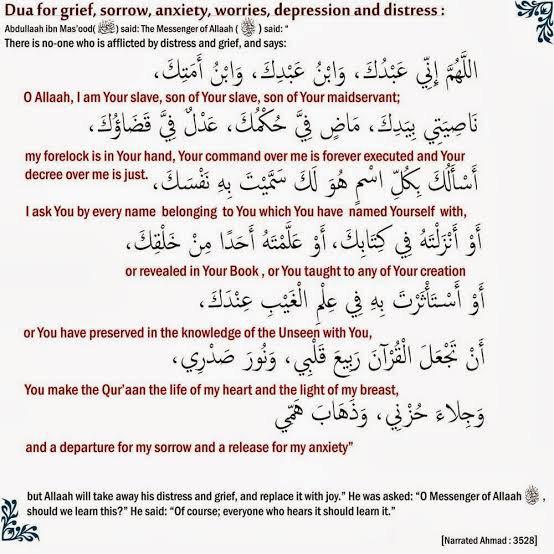 Both of these can be read, after saying Bismillah (in the name of God) while placing your (right, if possible) hand on your chest, with the intention of relief from sorrow. 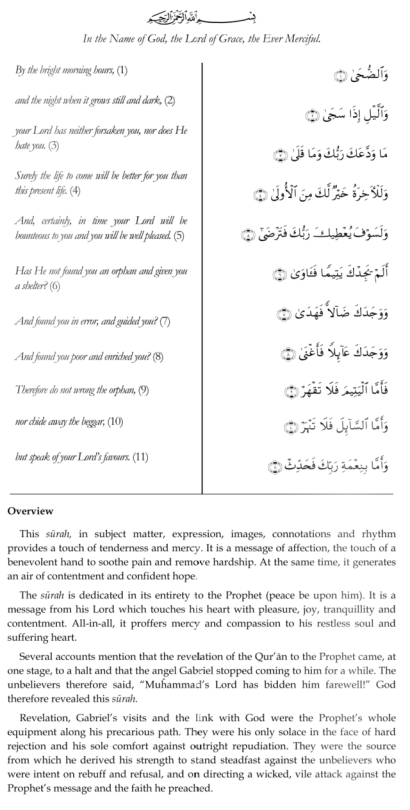 Go back to the main page!